The day began with an attempted murder!  Mr & Mrs Swan of the Wharf, who have a family of five cygnets were unhappy with a lone cygnet and chased it into the town lock that Matilda was trying to enter. They cornered the cygnet and both got hold of its neck and were trying to drown it. We were trying to bribe the family with food to get them out of the lock. With the help of other boaters we managed to get Matilda in, and the swan family out, and the gates closed, however that left the unfortunate lone cygnet in the lock too! It began by swimming down the side of the boat – not a good idea – but managed to get behind Matilda and stay there until the lock gates were opened and Matilda sailed out.  It seemed to have recovered from its ordeal, indeed seemed quite relaxed, staying to have a shower from the water leaking from the top gates! [Later moved gradually to near the Black Horse.] 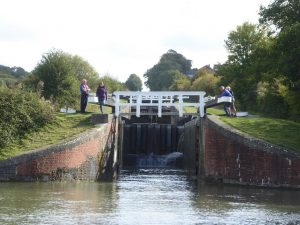 Then friends, and also volunteers on the Towpath Task Force, Joan and Tim continued to help us with the remaining seven to take us into the Marina.

Entered the last lock and Marina with Kelvin and Pam on board. Lovely to see them both.  Our thanks to everyone who helped. It took 4 hours and 59 minutes so we beat last years time of 6 hours 40 minutes. 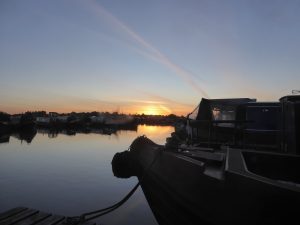 Since leaving Caen Hill on 16th April Matilda has covered 406.5 miles.  I have opened 32 moving bridges and 393 locks, not to mention the miles I have walked along the towpath!